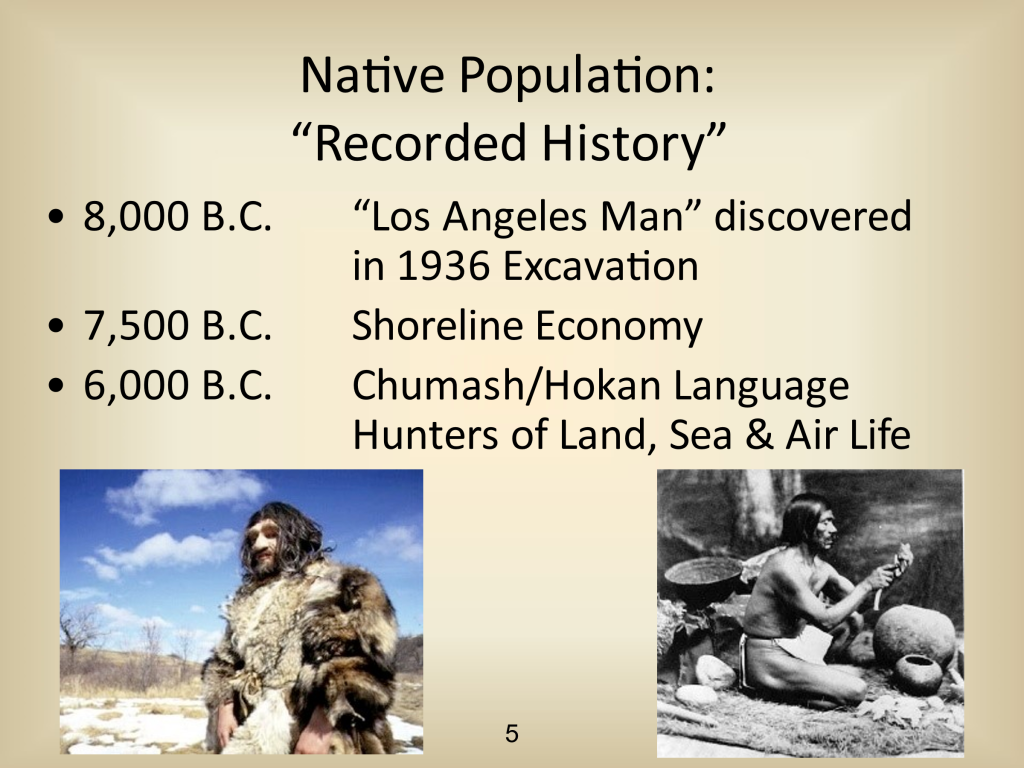 Some of you may share my long time dream of being able to travel in a time machine, which could propel me backwards in time, while standing at the same location throughout the ride, to observe what was happening at that exact spot 100 years ago, 1000 years ago and on and on. To share what that might look like in our local community, as you read, I will travel all the way back to 65,000 B.C. and move forward in time from the beginning.

Current prehistoric migration theories consider the possible links between our local native populations to Northern China and Siberia as far back as 65,000 B.C. There is a greater degree of certainty surrounding the theory of migration from Asia circa 25,000 B.C., as well as migration in 13,000 B.C. across the ice bridge that covered the Bering Straits between Asia and North America. In fact, there is evidence of settlement on the islands off the coast of southern California as early as 12,500 B.C.

Recorded history unveils evidence discovered in the 1930s excavation of Ballona Creek, when the Army Corps of Engineers created a nine-mile long flood control channel to protect the growing metropolis from flooding in the Los Angeles basin. The natural creek, once meandered through the Ranchos of the Los Angeles basin. During the excavation, partial remains of the “Los Angeles Man” were discovered in a storm drain. They had unearthed the mineralized cranium of a human skull. Though radiocarbon dating indicated an age of approximately 23,600 years of age, current theory suggests, due to lack of other supporting evidence of human habitation along the Ballona Creek, the Los Angeles Man is likely to have settled here circa  8000 B.C.

There is further evidence of a shoreline economy within the footprint of the Westchester, Playa del Rey and Playa Vista communities as fare back as 7500 B.C. There is also evidence of the Chumash Native American population, who spoke the Hokan language and who  survived as hunters of land, sea and air life, within this same footprint. There is evidence of a neighboring Tongva Village settled near the Centinela Springs flowing through Westchester, Playa del Rey and Playa visit circa 5000 B.C. The Shoshone displaced the Chumash, circa 2000 B.C., migrating from the Mohave Desert to the Los Angeles Basis, which they named the “Land of the Smoke.” The area was already polluted from the camp fires of the native population. They spoke Uto Aztecan, and considered experts in irrigation and the canalino culture, traded acorns, salt, fish, baskets, dogs and clothing with other coastal traders for the items they needed in return, such as obsidian for spears and arrowheads.

There is some evidence of foreign explorers arriving circa 1200. A Spanish novel, written in 1510, chronicles Spain’s conquest of what is now Mexico and California and speaks of New Spain and the Island of California. In 1542 Spanish Explorer Juan Rodriguez Cabrillo, who was first greeted by the native population at Santa Catalina Island, and followed by entering the mainland through the Baya de los Fumos (Bay of Smokes), believed to be the present day San Pedro Harbor. During the period of Spanish colonization and the founding of the mission system, in particular the building of the Mission of San Gabriel, circa 1770, the Tongva society became known as the Gabriellinos and today are often referred to as the Gabrielino-Tongva Tribe. By 1800, the native population death rates nearly doubled due to the new foreign settlors.

After a hard fought Mexican War of Independence from 1810-1821, Spanish Rule ceded to Mexican Rule.  And as soldiers were awarded land grants for their service in this War of Independence, within our Westchester/Playa footprint, Mexican soldier Antonio Avila was granted 40,000 acres and acquired Rancho Sausal Redondo in 1937, in which the most of the present day Westchester/Playa communities sit. Rancho Ballona was acquired by Ygnacio and Augustin Machado and Felipe and Tomas Talamantes in 1939. The Centinela Adobe, which still sits at the eastern edge of Westchester, was the first home to be built from the local community footprint all the way south to the Redondo Beach / Torrance area, was built in 1829 by Ignacio Machado.

After the U.S. invaded Mexico, which included Rancho Sausal Redondo and Rancho Ballona, the Treaty of Guadalupe Hidalgo gave Alta California to the U.S. and “California” becomes a U.S. Territory. It took two years of contentious debate, over the issue that California citizens wanted to enter the Union as a non-slavery state.  Statehood was granted in 1850.

Stay tuned for next month’s continuing time-machine journey. In the meantime, visit the Westchester/Playa Historical Society Discover Center, Sundays between 9 a.m. and 1 p.m. On Sunday, September 5th, the Discovery Center will be showing “Eminent Domain, An LA Story by Leo Sichi at 10:15, 11:00 and 11:45 a.m., with the last showing at 12: 30 p.m. Leo is a Westchester resident and student at Loyola High School, whose video has been recognized by the 2021 All American High School Film Festival. Visit our website https://wphistoricalsociety.org/.